I’ve playtested a few sessions online in 2021. The game feels about 30% there mechanically and 85% there thematically/narratively.

I recently began thinking about some ways to reduce some challenges with the flow of the game and was inspired by Psi*Run (again). I’ve created a simple matrix between the Fate dice results and categories. It definitely needs playtesting to see if it works.

Note: As of the end of 2021, work on Legends ceased and its efforts were translated into Legends of the Realm.

Legends of the Realm (formerly LEGENDS)

The entire work cycle for LEGENDS was growing due to the sheer number of playbooks and moves, so when I heard about Unincorporated I saw an option to get my appreciation of the Arthurian tales as a game moving forward. I was able to create and playtest the game, which was great fun. I will revise some areas when I have time, but the game is mostly done.

I’m in the midst of a short series playtest and will update.

I’ve done some editing on this but it’s a long way off in development. With a recent update to AW: Burned Over I can see that this idea may have legs.

Reworking the Law Actions which will inform the character information more. It’s coming along. 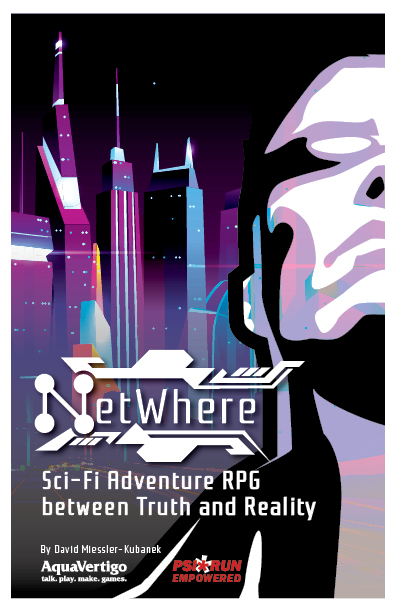 A science-fiction game about the search for truth and reality.

Story – What Is NetWhere the Roleplaying Game?

IT BEGAN WITH A CRASH…

The Truth is that the world is not what it seems. Only people like you, working together with your Revelations and Net Effects can hope to change it. The Truth is what you make of it. Beware the Agents of Truth, because when we find you, Hackers, we will stop you wherever you may go, in this world, or the next.

NetWhere is a tabletop science-fiction roleplaying game about virtual reality and self-discovery. It’s inspired by stories like those found in movies such as The Matrix, Tron/Tron Legacy, Inception, and Dark City.

NetWhere’s mechanics are inspired by and require you to have a copy of Meguey Baker’s amazing Psi*Run game (from Night Sky Games, http://www.nightskygames.com). Psi*Run is a game about amnesiacs with powers, Runners, who are pursued by mysterious Chasers. You play to find out who they are, who you are, and what happens next.

NetWhere’s designed as a multi-session game about Hackers searching for the Truth while avoiding capture by the Agents of Truth. Hackers are exceptional people who straddle the edge of reality between virtual worlds and whatever remains of the real world. This includes adventures that take place.

It’s your job, as Hackers to find the Truth and decide what to do with it once you’ve got it before the Agents of Truth can stop you.

Along the way, the Hackers use a Sitemap with information as they travel from node to node, and the Agents of Truth pursue the Sitemap relentlessly.

Will the Hackers learn the Truth? Will the Agents convert or destroy them?

In NetWhere, the group gets to challenge assumptions about what’s real and what can be changed, in terms of perspective or in actual manipulation from world to world.

Use the Net World(s) and Core World to explore this relationship in the game and the Sitemap to show it with multiple paths of Nodes that track where and when Hackers have experienced risks for the Truth.

NetWhere is a tabletop roleplaying game for 3-5 players that takes about 3-4 hours to play per session. The game uses light rules, narration, and a standard set of six d6. As you play and follow the fiction of the story, you look for when your character is risking something which could change their fortune during the game. When this happens the GM will ask the player to pick up and roll 3-6 dice and collaborate on the results. At times this may reveal something about the Hacker or bring them closer to a direct conflict with the Truth.

Exceptional people like you—not just computer geeks, good with breaking corporate firewalls—searching for the Truth; you’re determined and capable to bypass barriers between the reality of the Core World and the Net World.

The Internet. A matrix construction. A guided network of fate. A dream within a dream. It’s the place where virtual worlds come alive and the Core World, if it even exists, recedes into the background.

Online chatter says the Net World is the space where Truth lives. The realm of possibilities. The domain of reality enforcement, created and maintained in perfect source code. A code that many Hackers have died trying to glimpse.

For some, the Net World is the only reality they know, unless they are shown the way by a Hacker. Then, how can you ever go back to believing in and living in a world that feels artificial?

There are signs that suggest that this may be the heart of the Net World, the source of Truth, or the origination of everything. It may be the site of the cold hard reality which the Net World mirrors, a home to determined resistance groups, a stark heart of darkness in which humanity sleeps, waiting for someone like you to open to the light of a new Truth. Many have sought it out.

You’ve changed since you made contact with the Truth. You’re not sure why or how, but now you can do things in the world that you could only imagine. These Net Effects make you stronger, faster, and tougher. You know them to be part of the bleed between realities that you’ve discovered.

Be careful though as using your Net Effects can be dangerous to others. And their use can attract the wrong kind of attention.

They say that finding the Truth can set you free. Freedom is worth the struggle, the suffering, the loss, in the name of something better.

You’ve looked for it online and in the world around you. So you seek the Truth with a compulsion from deep within your very being. Symbols and transmissions. Code bases and servers. It’s up to you to figure out how to manage it before it’s too late when the Agents of Truth stop you.

The Agents of Truth

The eyes, mouths, and hands of Truth are vigilant. They work to find and deal with Hackers, one way or another. And they are said to be cunning, indestructible adversaries. The best advice for dealing with Agents is to run and hide. If they capture you, you’ll most likely disappear from this world and the next. Your only hope is that it ends quickly.

Sometimes when Hackers go too far or risk too much they become the victim of their own desires or are convinced by the Agents of Truth to cease the search for the ultimate Truth. When this happens it’s never certain that a Hacker can or will be saved, but if it happens it’s usually through the work of one or more seekers.