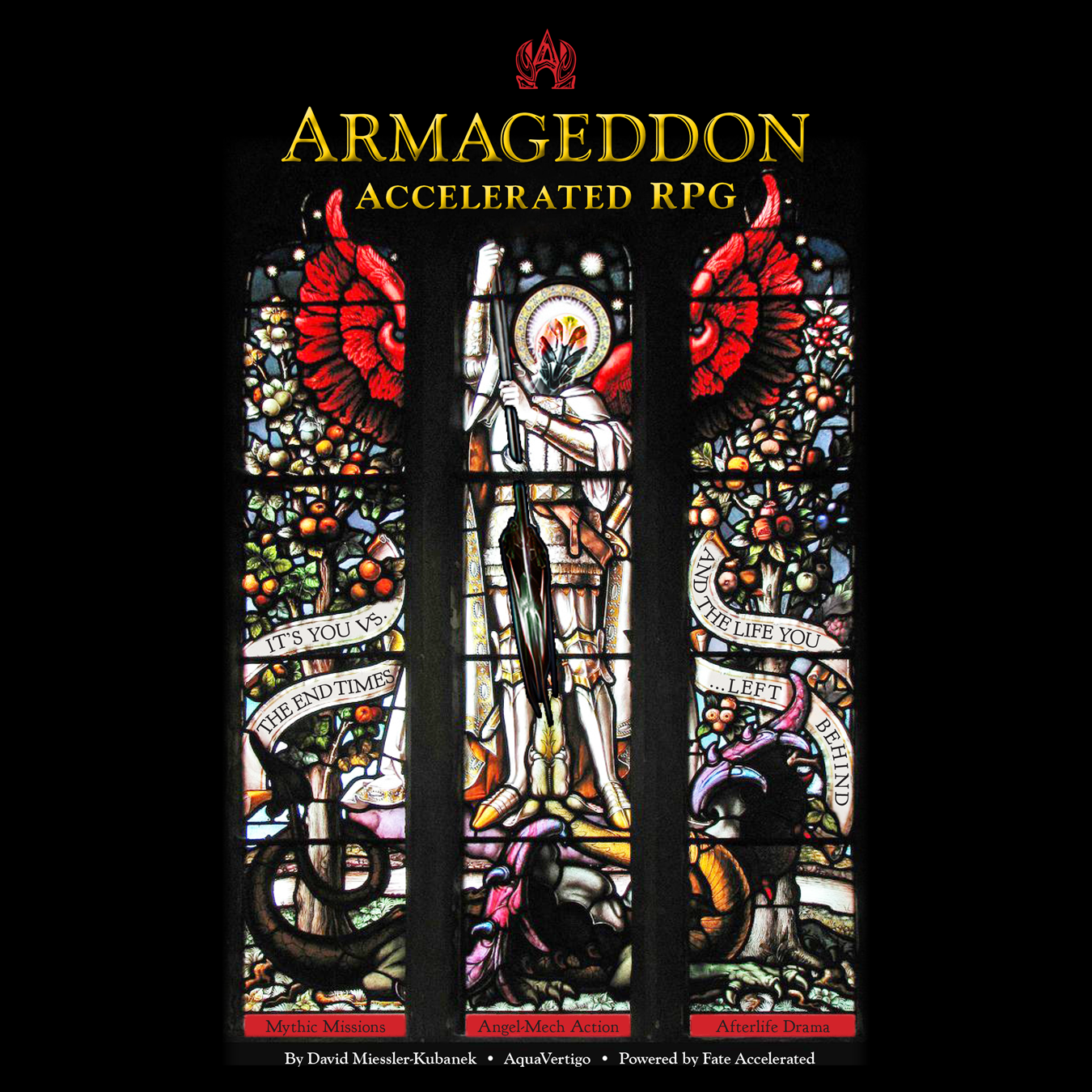 Story – What Is Armageddon Accelerated the Roleplaying Game

You were recruited at Death’s Door. They said you had a choice. Serve a Higher Justice and get another shot at what you left behind, or get in line for Judgment Day and watch helplessly as The Adversary and others shift the balance in their favor. Why the Hell not?

Mythic Missions. Angel-Mech Action. Afterlife Drama. Armageddon Accelerated is a tabletop roleplaying game about pre-millennium cold war conspiracies and warfare between The Powers That Be and The Adversary. Both sides use agents in their game to advance agendas and to manipulate the Doomsday Clock towards or away from Armageddon.

The players take on roles as the Agents on the side of The Powers That Be. These agents are recruited at Death’s Door for an opportunity to help prevent Armageddon, AND to get another shot at resolving the life they left behind.

Over the course of one mission, these hand-selected agents may work to return stolen artifacts of sacred power from fiery pit demons in a long lost pyramid, prevent The Adversary from possessing the bodies of world leaders at a peace conference in time to prevent WWIII, and tussle with things 20,000 leagues under the sea and beyond the scope of the Book of Revelation via sacred weapons of mass destruction and their uplifted angelic Vessels.

In Armageddon Accelerated, players are characters given a second-chance at life by signing up to serve as agents to work for The Powers That Be. Their souls are bonded with retrofitted angelic bodies granting the agents supernatural abilities that allow them to deal with sin in their communities and to confront the minions of the Adversary. Every soul has unfinished business from their Old Life and all try to come to terms with it in their new existence in their After Life—with the hope of retirement and getting what they deserve, a chance at the Good Life. Others may abandon that to serve indefinitely with Halo.

Armageddon Accelerated is set in the pre-2000’s modern world where uncertainty and fear run rampant against the backdrop of paranormal phenomena and End Times conspiracies.

As agents of Halo, you are responsible for making a difference in the world, even if the will of The Powers That Be seems unknowable or beyond human comprehension in the lead up to a final confrontation between sides and their soldiers.

For agents like you, there’s more to it with a second chance to make things right with the people you left behind. It’s an opportunity worth the price to return and serve your benefactor.

Armageddon Accelerated is a tabletop roleplaying game for 3-5 players that takes about 3-4 hours to play. The game uses Fate Accelerated similar to the Dresden Files Accelerated ruleset, revolving around the creation and use of factions, assignments (inciting incidents), virtues (approaches), aspects, graces (stunts), stress and conditions, the use of mantles, and vessels (angel bodies). As you play and follow the fiction of the story, you look for when your character’s virtues or graces come into play while performing one of the four Basic Actions: Create an Advantage, Overcome, Attack, or Defend. Often situations will arise where you will spend Faith Points (Fate Points) and/or roll four-Fate Dice (4dF) and add the corresponding number from the approach, a grace, or an aspect.

Contrary Virtues are how agents of The Powers That Be approach situations both during and outside of work and they include both sides of the coin of Virtue and Vice. As in other Fate Accelerated games you will assign a number of modifying points (Mods) to the Approaches, called Virtues in Armageddon Accelerated (see example below).

In addition to that, should an agent wish to use the Vice version of their Virtue, they need only mark the box in that column. This acknowledges the use of the Vice and gives the agent a +3 to the result. Whenever an agent fills in all of the boxes for a specific Vice, add a point to Corruption and clear the Vice boxes. The Corruption Track measures how close an agent is to losing to the power of the Adversary.

Vice boxes can be cleared through atonement scenes, however, until cleared the number of boxes marked can be used against an agent in future conflicts and players should take marked Vice boxes as guides to roleplaying scenes.

Stunts in Armageddon Accelerated are called Graces and they reflect specialized training, supernatural gifts, exotic equipment, access to special resources, or anything else granting a unique perk in a particular situation. A selection of graces is provided with each mantle, but you may also create your own as a facet of character creation.

The mantle you select for your character encompasses their character type, general role in the game, and need defined by The Powers That Be. Each mantle comes with a package of stunts and conditions that help the character fulfill their role.

No restrictions exist on choosing mantles. Everyone may choose the same mantle if the scenario to be explored focuses on a single type of character (e.g., all hunters or rookies) or each character can have a different mantle so the group has a wide variety of concerns and agendas.

There are 7 mantles in the base game of Armageddon Accelerated, but we might be able to add more through stretch goals. The basic set includes:

The Powers That Be

The Powers That Be are a group of high-powered individuals working to counter the Adversary and prevent Armageddon. They have created organizations such as Halo to prepare souls for the long fight against the minions of mayhem. The Powers That Be claim to be the last best hope for humankind.

To monitor threats on a celestial scale, The Powers That Be created a Doomsday Clock housed in the headquarters, the Cathedral. This clock monitors events across the world. When such events change or move humanity closer to midnight that means we are one step nearer Doom. Events perpetrated directly by agents of the Adversary are often the biggest contributor to this, but these are rare and often face immediate countermeasures. However, small events in communities affected by Sin are more prevalent and require intervention through embedded agents. Agents like you serve to deal with the proliferation of Sin and as watchers for the larger Doom events which The Powers That Be are more equipped to handle.

In Armageddon Accelerated, player characters work together through a secret organization called Halo—and are assigned to areas called parishes to help the communities deal with threats foreign and domestic-related to Sin and the Adversary. Here are the types of threats one might encounter in a community:

The Power of the Angels

Messengers of God with supernatural abilities, angels represent an iconic form beyond humanity and yet they seem limited in capability of self-actualization or will at times—prisoners of their own creation perhaps. In Armageddon Accelerated The Powers That Be have made angels available for use for their agents who get to experience some of what angels may be like through their bonding with the forms known simply as vessels.

As a vessel the angel form is a mysterious construct of light and sound made flesh once bonded with a human’s soul. Once the process has passed the agent may learn to understand and grow into the vessel’s potential, including its different operational modes, or stages of ascension.

Armageddon Accelerated is meant to be played in an episodic format with characters entering and exiting as the story or players need. The characters are problem-solvers for the community and for each other. Some agents decide to retire from fieldwork; others don’t survive the toll of the job. For those who stay on with [the organization], they often take on new roles or transfer to other departments. For the few who make it through and can collect their pension from the deal, they are said to be living the good life without any memory of serving. Blessed are they.

Working to prevent the End Times and corruption of humanity by the Adversary, along with trying to reconnect with family and friends from your Old Life is a tough way to go about your After Life, but it’s what you have to work with and sometimes maybe you cross the line and face corruption for the good of the world. At the beginning of play, characters choose one Sin they are vulnerable to; and as the game progresses and they make take on the Adversary, their humanity may slip, and they may edge closer to losing their soul for good. Without help from the other agents or loved one it’s all but certain.